How to Write More, More Often

One reason you don’t write more often is this: You’re working from the wrong metaphors. Today, I’d like to pass on advice from three writers. They can teach you how to write more, more often.

In the fall of 2006, I joined the graduate creative writing program at The University of Tennessee, Knoxville. Writing was, for all intents and purposes, my job, yet writing became more difficult.

The program already boasted many talented poets and fiction writers, so my “special gift” didn’t look so special anymore.

Though I wasn’t fully cognizant of it at the time, I felt compelled to prove that I deserved my spot in the program. When I would sit down to write—POOF!—a blue cartoon angel would appear on one shoulder, and a red devil would appear on the other.

The angel would whisper, “Forget about what people will think. Write whatever fascinates you!”

The little devil wasn’t so encouraging. He would point out each cliche and worn-out analogy, every rocky transition and snatch of wooden dialogue, leaps in my logic and holes in the plot.

He anticipated all of the ways I would embarrass myself:

Rather than sound my barbaric yawp from the rooftops of the world, I was mucking out a barn.

Comparison will cause your words to flow like mud. Comparison kills your creativity. 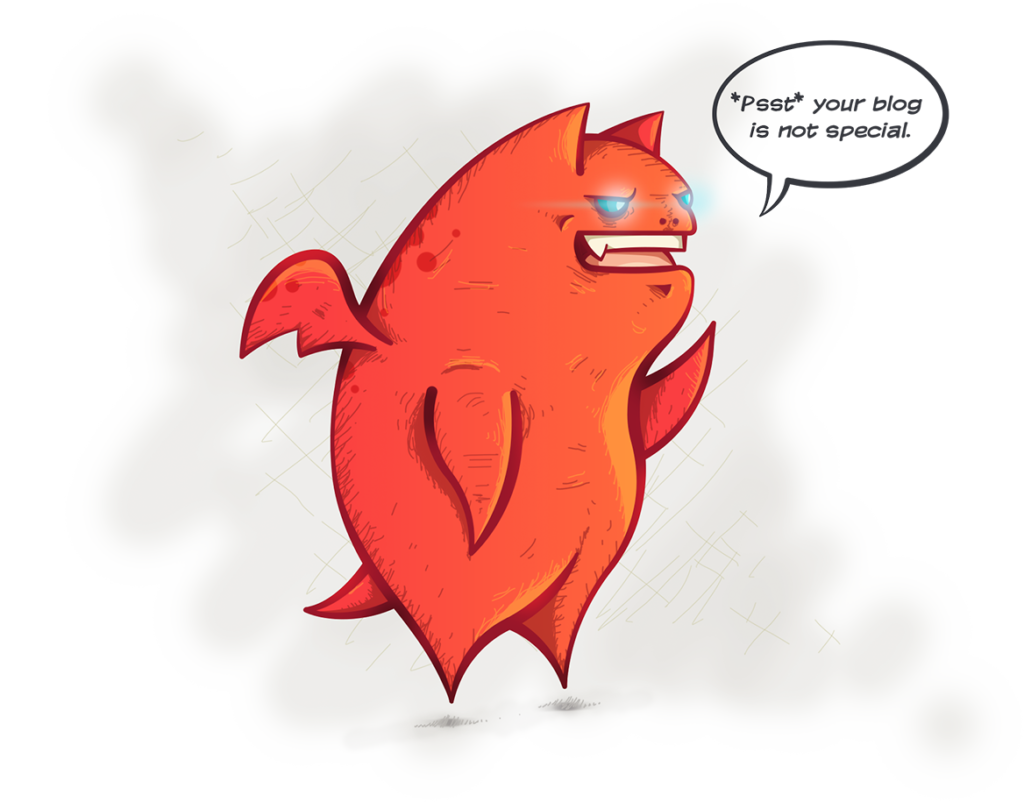 What about you? Does the red cartoon devil fill your ear with discouragement? Does he distract you from the work at hand with unflattering comparisons? If you don’t find ways to muffle his voice, your own negative self-talk will start repeating what he says:

If you believe that geniuses out there nail their Pulitzer Prize-winning masterpieces in the first draft, then yes, that impossible (and nonexistent) standard will dry up your words.

But they don’t. And you won’t.

So your goal is to simple: Write more, more often.

How to Write More, More Often

After I graduated and creative writing was no longer my job, I was able to establish a much healthier, stronger writing process.

What enabled me to free myself from paralyzing comparisons and turn down the volume on the negative self-talk was putting advice from three veteran writers into practice:

Nothing exists before you write the first word.

The way you think about writing will determine your output.

The right attitudes and beliefs will loosen up your mind and allow words to flow. The wrong mindset will stymie the flow. For example, I once thought of writing as transmission, but for writing-as-transmitting to be possible in any meaningful sense, a poem, story, or blog post must first exist in a person’s mind as an intact artifact. Your hands must act as a satellite dish that receives transmissions from your brain about that artifact and converts them into words.

The impossible goal becomes mirroring an exact replica of that mental artifact on the page.

If your experience is anything like mine, this transmission-transcription-mirroring process produces crude, inelegant, and fragmented drafts. You read over what you have just written and think, “It sounded much better in my head.”

The disparity, in turn, gives birth to frustration and disappointment.

So you write less.

But the fact is, nothing exists before you write the first word. You aren’t trying to use words to build a perfect replica of a mental artifact.

Give yourself permission to write “shitty first drafts.”

Forget transmission and mirroring. Writing first drafts is much closer to digging latrines than drawing butterflies. There’s no performance to be graded here. The only desirable outcome is finishing. If you give yourself permission to write a “shitty first draft”—to use Anne Lamott’s potty talk from Bird by Bird—then disappointment won’t kill your enthusiasm.

Writing a first draft is inglorious work, and your job is finish it. That draft supports the bigger project, and there’s no way around but straight through.

So the pressure is off.

Give yourself permission to write the worst blog post that has ever been written. When you see the mess you made, you will feel satisfaction, not frustration, because you generated the raw stuff that you will need later.

Of course, the first draft will be rough-hewn and covered in sawdust. That’s why we call them rough drafts. But unlike the artifact floating around in ether, rough drafts are real. They have real flaws and real potential.

Any piece of writing you share will go through multiple revisions anyway, and you can attain your desired level of quality later in the editing phase. Your first job is simply to start and finish an exceedingly crappy first draft.

Embrace the crude and rough-hewn.

A Pinch of This, A Dash of That

Or perhaps you will prefer Peter Elbow’s less scatological metaphors. In Writing Without Teachers he compares the drafting process to cooking or growing a garden.

Eventually, all those disparate ingredients will coalesce into a whole. You may still be able to recognize distinct pieces, but they’ll work together and support one another.

Your goal here is to simply get words on the page, and by adding enough ingredients, you’re bound to finding a thought, paragraph, or sub-topic worth salvaging and developing further.

Elbow’s idea of a garden is helpful too. You dig holes, you plant seeds, and you water them. Eventually a whole host of other chores becomes necessary: weeding, hoeing, pruning, and fertilizing.

You certainly won’t finish your garden in a day. You don’t stress about one errant seed, and you don’t obsess over one sickly sprout that can’t lift its head. You have others.

You cannot know what your garden will yield until you’re halfway through with it. You must trust the process, and the harvest takes care of itself.

So what’s the real subject?

In fact, you may not know what you’re really writing about until the end of your first draft or several drafts later.

Richard Hugo’s The Triggering Town helped me to understand the difference between the generative or trigger subject and the real subject.

When you sit down to write, you have a loose hold on an idea’s tail. Your grip slips, and it gets away. Oh no!

But you keep writing and chase down another idea. Lo and hold, it becomes the real subject of the post. Eventually, you shape it up into a cogent piece you might actually publish, at the point you are ready to hit “publish,” the generative subject that got you started has disappeared altogether.

That’s okay. While putting words down on a page, you are not creating an obligation to save them all. You are writing, and writers are exceedingly wasteful.

Waste is an occupational hazard for writers. You write your way from the generative subject to the real subject, and then you can go back later and cut out the surplus material.

Taking out the garbage is as much a part of the writing craft as digging the latrine.

For example, awhile back, I wanted to pursue the idea of not giving up too soon. I wasn’t sure quite where I was going. It was just me and the page and whatever drivel I produced until I got a good hold on the real subject.

The final product, “The Boring Secret to Success,” was really well received by my audience, and I was delighted by some of the connections I was able to make along the way, including a chapter from Malcolm Gladwell’s book Outliers about wet rice agriculture and math.

Do you need change how you think about writing?

So stop and consider why you aren’t writing more often. Lack of time is no excuse. If writing consistently were really a priority, you would find the time.

Perhaps you don’t make the best use of the time you have already set aside? Or perhaps your writing frustrations too often end in disappointment and frustration? Take some cues from Anne Lamott, Peter Elbow, and Richard Hugo.

If you assume that no one will ever read your shockingly mediocre draft, then you can throw sand like a kid in a sandbox. He doesn’t waste creativity or mental energy worrying what his peers might think about the quality of his throwing. He’s just having some fun.