Be Hard to Offend

The trouble with gaining experience is that you also gain perspective. I’ve been freelancing eight years now, since April 2009, and I can look back on a number of situations that I could have handled better.

I haven’t “lost” many clients. (Or perhaps the handful I truly did lose chose to make a graceful exit instead of getting in parting shots.) And most of those even, I’d wager, have forgotten the situations that I remember as fumbles.

So I’m not looking back on a wake of irreconcilable differences with clients or huge lapses in judgment. Rather, I’m talking about blowing minor misunderstandings out of proportion with a surplus of pride and shortage of wisdom; escalating otherwise innocuous situations.

The Hebrew language has a word I find helpful: aharit. It relates to time and means, among other things, “afterward, backwards or after part.”

H. W. Wolff compares the Hebrew concept of time to a man rowing a boat. The rower sees the past in front of him (qedem) while he backs into the future (aharit).

With aharit, and its broader context in Hebrew, the sense here is less of anxious progress in fits and starts—“What’s going to happen? I must know!”—and more of a steady and meditative release of what you cannot control in favor of what you can.

Try to look over your shoulder while you row, and you may get a crick in your neck. At the very least you’ll find it hard to travel in a straight line. Or, look backward, with a mind to where you’re going. Row with a sustainable rhythm, savor the sweat, pause to drink in the scenery.

I tend to be hard on myself, so you can see why the rowboat appeals to me. Our past is the banks on either side of the river that orient and guide us.

Given enough time, we might come to see our business mistakes as our secret sauce, our competitive advantage, rather than regrettable failures and sunk costs. 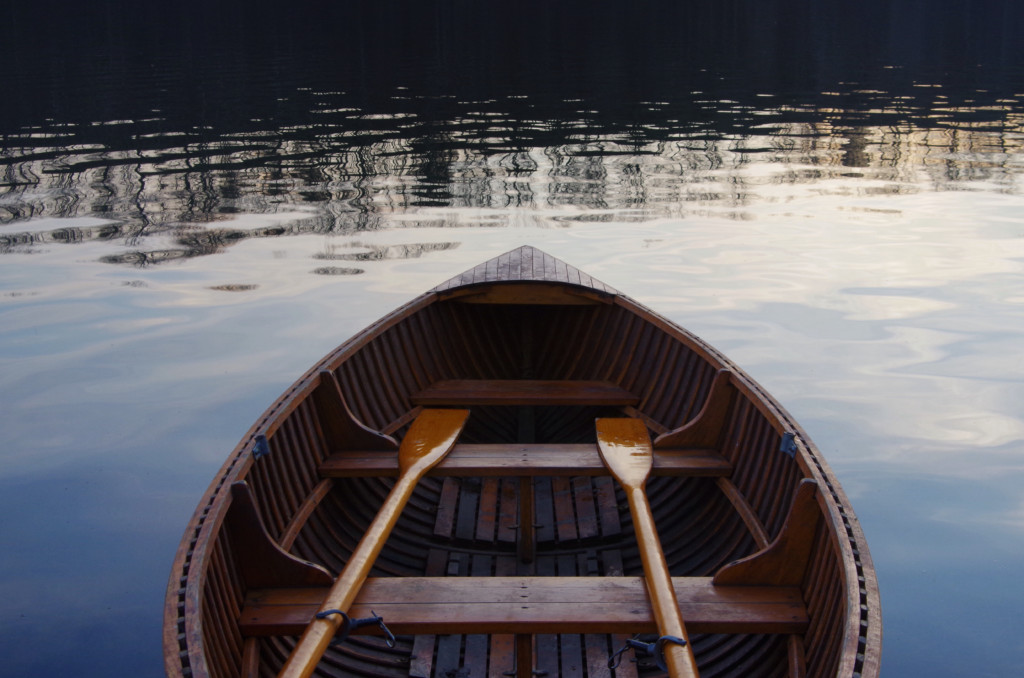 Backing Into the Future

When I reflect on where I have come from as a businessman and where I want to go, I can pick out one trait that I want to define my future interactions: Being hard to offend.

I have wasted so much time and emotional energy because I have been prickly. My indignation at criticism, negativity, or even outright blame has at times caused me to lose sight of my commitments and goals.

For example, in the past, when a client took issue with some piece of work I sent over for review, I would give too much power to his or her response. If the feedback weren’t positive, I’d stew in my frustration. I’d indulge in internal dialogues where I took him down to size.

The problem with those dialogues is two-fold:

1) They are ineffective. They neither solve the immediate problem (e.g., the web content that requires more editing) nor serve the bigger goal (e.g., keep the client happy, finish the project in a timely fashion, get more lucrative work from that client or a new one, grow the business).

2) They are wasteful. Because I’m so busy crafting repartees, I can’t be about more important tasks. And by wallowing in self-pity, I’m willfully denying entry to my natural optimism and enthusiasm that would spring back given the chance.

In similar fashion, I have taken umbrage at a client’s lack of gratitude. “Didn’t she realize that I bent over backwards to meet that deadline? The least she could do is say thank you.”

It was like a dog had sunk its teeth into my leg, and I’d drag it around. Preoccupied when such grievances, I’d vent to anyone who would listen: fellow freelancers, my contractors, my friends, my family, and my wife.

What does rehashing the fiasco do? It keeps the emotions stirred up. I’d tell people the story because I wanted to feel vindicated: “Can you believe she said that? Ridiculous, right?!”

I wanted to feed my indignation rather than feed my optimism, and in so doing, I would miss out on the simple gifts of the present. Put simply, I’ve allowed too many emails and situations to ruin my day.

After a day or week, those fiascos proved to be inconsequential. The perceived threats weren’t real. I got wound up for nothing.

Does that resonate with you?

Perhaps I’m in the minority here. But given the ubiquity of freelancers complaining about their awful clients–most of whom are people acting the way people do when they’re anxious or stressed–I think some of you might want to join me on my journey to becoming hard to offend.

Those of you who already have some freelancing experience will know this stereotype: the jaded, beleaguered freelancer in financial straits because a regular stream of doofuses and crooks took advantage of him or her.

The reality is that no freelancer lands only dream clients with handsome budgets, reasonable expectations, and generous timelines.

With that in mind, how will you handle yourself?

Miscommunications are a fact of life. You will have clients who get hung up on one insignificant detail; ones who blithely ignore the many, many wins you have handed them and fixate on a single mistake; ones who blame you for “missing” the original launch date after they introduced delay after delay.

This is normal. This is common.

If you can’t bounce back quickly from the passive-aggressive email, insensitive voicemail, or outrageous claim of professional misconduct, then you’re going to be grumpy for a significant portion of your waking hours.

I, for one, am tired of wasting energy on indignation. I want to be hard to offend.

I’ve been reading Robert Jordan‘s Wheel of Time series. A warrior class called Warders come in and out of the story. They serve as companions, confidantes, and bodyguards to the Aes Sedai—think, female sorceresses.

Warders certainly have deep emotions and principles. They’re not stoic. But nothing fazes them. They are as dispassionate as they are impervious to the elements.

Jordan emphasizes these qualities in each of the novels. The Warders’ training and their code of honor makes them very difficult to deceive, manipulate, or coerce. Their physical and mental toughness makes them very hard to offend.

The last part is the most important.

We must care more about our commitments to ourselves, our code of conduct and our long-term goals, them we care about Bill’s habit of poking to keep people off balance or Cindy’s resentment-laden sarcasm or Donnie’s outright threats.

Such personalities and power plays are, again, a fact of life.

Once some people realize they can gain some advantage by throwing a tantrum or throwing some shade, they will–whether it’s right or wrong, fair or unfair, mature or childish.

Will we bare our teeth? Will we cower? Will we back away, tail between our legs, and go lick our wounds under the porch?

The question is not whether people will mistreat you, but how you will behave when they do.

I’d prefer to be hard to offend. When people poke at me, whether as a conscious power play or out of some subconscious impulse, I can simply bite my tongue.

People can’t get a rise out of you if you don’t give a rise.

Passive-aggressive jabs. Ignore them. Accusations and shaming with a cherry on top? Ignore it.

Apologize quickly when you make a mistake. Don’t apologize when you haven’t made a mistake. Take responsibility and rectify the situation as best you’re able. Be hard to offend.

Don’t my rise to the bait. People can make whatever claims they want, but making a case requires evidence.

Sometimes it’s best to ignore claims altogether. To respond to certain claims, threats, and absurd demands is to dignify them, to give them validity when they had none before. Hold your peace, and soon enough, the rumor mongers and polemicists will blow up the news with another controversy.

When people demand a response from you, you don’t have to oblige. In fact, that would be to let them control your actions.

We need our passion for what we do. Sensitivity can be a gift, and it can also be a paralyzing vulnerability. So be sensitive and be hard to work offend. I’m striving to embrace the paradox.

You’ll know when you must fight. You’ll know when it’s time to establish boundaries and protect them tooth and nail. You will butt heads with clients from time to time. Some clients will realize that their own anxiety and stress turned a molehill into a mountain. They may even apologize, and you’ll have better communication and rapport as a result.

Even if you end up losing one, it’s better to leave your righteous indignation unfed and have a really lovely, productive day. The immediate emotional payoff aside, wouldn’t you prefer to hire an unflappable Warder?

I want to be a Warder, not a whiner.

As I back into my future, I want to be hard to offend.

Let’s become the freelancers that the best clients really want to hire.