I have decided to launch a Grabbling Kickstarter campaign.

I know. I’m excited too.

In all seriousness though, I believe this is the right move.

Last fall, I considered doing a Kickstarter campaign, but several factors led me to set up a standalone landing page instead:

My friend Jordan called me last week and asked the obvious question: “Why didn’t you do a Kickstarter?”

When I attempted to explain my thinking, I saw those factors for what they really were—flimsy excuses.

Stripped of my excuses, I got down to work. A unsuccessful campaign five years ago is not a good enough excuse to not try.

Is a previous failure ever a legitimate excuse?

My campaign doesn’t require a video with high-production value. No one expects that of a writer anyway. Better to launch quickly and imperfectly, and be honest about my fears and hesitations in the video itself.

Setting up a Kickstarter doesn’t have to take hours and hours. Parkinson’s Law says that tasks and projects require as much time as we give them. I took my campaign from nonexistent to launched in two and a half hours. I already had the copy and images, so copying and pasting took no time and all.

And so what if Kickstarter takes 10%?

Now that I’ve been forced to reexamine my own faulty thinking, I can see that Kickstarter’s much broader reach will more than cover the cost of using the platform. In fact, even though the campaign has been live less than 24 hours, two strangers have already pledged.

What is the goal?

I raised a little over $3000 in pre-orders with the original Grabbling landing page: http://grabblingbook.com/.

My total project goal is $6,300 for illustrations, printing, and shipping costs, and as I write this, the Kickstarter campaign shows $550 pledged of $3,300.

The campaign is already one-sixth (or 16%) of the way there with 29 days to go! I continue to be amazed by the kindness and generosity of friends, family, and strangers. 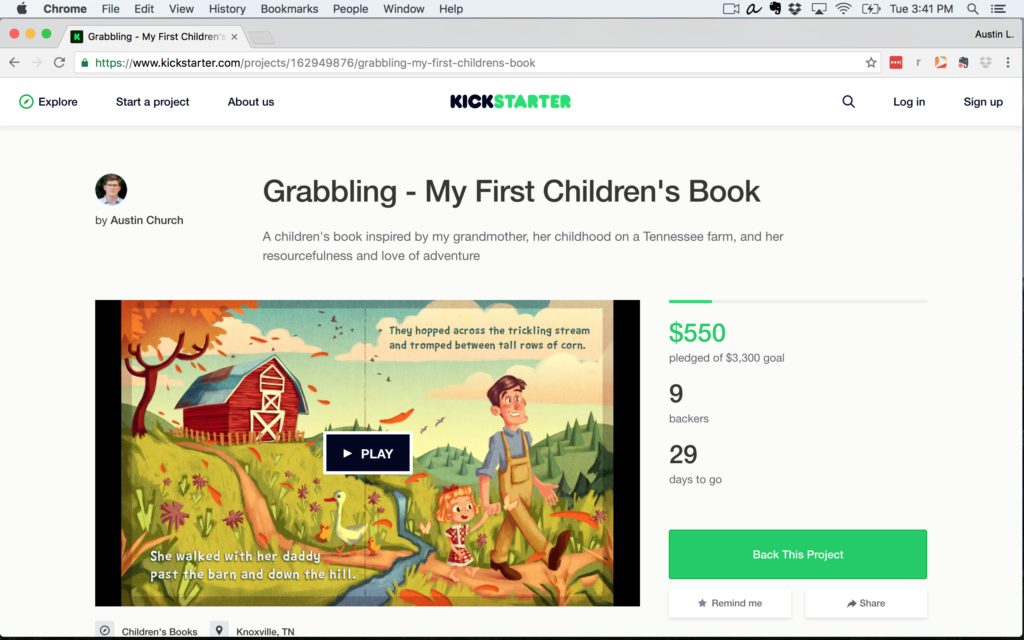 Even $1 will help though I obviously think a signed copy of the printed book won’t hurt you either. To get started, click/tap the link below and hit the green Back This Project button.

Thank you. You have my deep appreciation and gratitude.

P.S. While we’re on the subject of second chances…

Is there a project, relationship, opportunity, or platform in your life that you need to give a second chance?

In retrospect, my reluctance to use Kickstarter seems short-sighted and out of character. Pride made up the major part of that reluctance.

Get over yourself, Austin. So what if lots of people do Kickstarter campaigns? You were never that cool, and it’s a solid platform.

So what are you wanting to accomplish?

Perhaps the perfect tool or strategy lies within reach, and like me, you can succeed faster if you will do the hardest work of all and swallow your pride.

Let me know if there is some way I can help you with one of your boomerang dreams.